The workshop “Mayu,” to be held May 30 - June 1, 2015 in Tunis, Tunisia, aims to strengthen our understanding of the link between public opinion, elite behavior and outcomes. There is often a gap between public attitudes and political outcomes. For instance, public opinion surveys show widespread support for democracy in Egypt, Morocco, Tunisia and Libya, but this support has not translated into smooth transition processes toward democracy. Similar gaps are found with regard to service provision, foreign policy and other outcomes, and the distance between preferences and outcomes varies across time, between countries and sub-regionally.

There are several potential explanations for these gaps. It may be that elites remain unaware of public sentiment even when relevant polls exist, or they distrust the information that reaches them. It may also be that some segments of the public are more relevant than others, and elites respond to their interests. Or, potentially, that pressure from those with political connections or other competing interests overrides public concerns – at least in some places, at some times.

The workshop will bring together scholars and policymakers from North Africa and the US/Europe to examine the relationship between public opinion and government behavior and policymaking on a series of issues: elections, democratization, social service delivery, cultural and religious policy, and foreign policy. The goal will be to examine the extent to which public opinion and elite behavior are congruent; to determine the reasons for convergence or divergence; to engage in theory-building regarding the relationship between public opinion and elite behavior; and, where possible, to offer suggestions about ways to narrow the gap between ordinary citizens and decision-makers.

The workshop will center around four interactive roundtables based on substantive areas of public concern and a fifth session that will summarize and outline conclusions. Substantive panels are expected to focus, respectively, on governance and political accountability, social service delivery, cultural and religious policy, and foreign and security policy. At each roundtable, panelists will reflect on and endeavor to explain the relationships between public opinion and ultimate outcomes in the thematic area under consideration.

To facilitate this discussion, the co-organizers have circulated results of available public opinion polls regarding the topic before the meeting. Prior to the conference, panelists have been asked to reflect on findings based on these data, or other survey data to which they may have access, and to assess their significance and impact in relation to key events and elite action, or inaction, in selected (or all) Maghrib countries. These reflections and assessments are summarized in memoranda that have been circulated in advance of the meeting and will be briefly presented as a starting point for the discussion at each thematic roundtable. 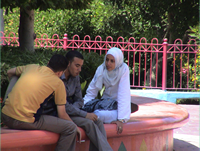